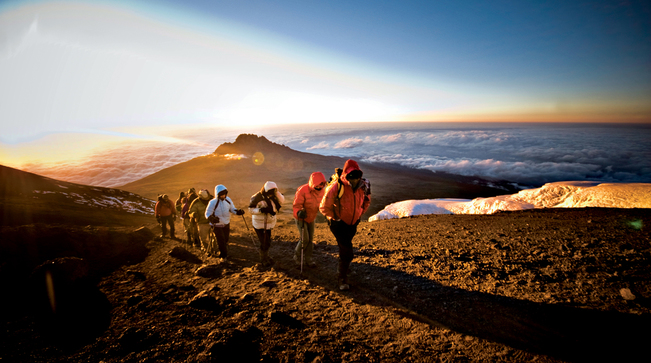 Mount Kilimanjaro has a several number of official climbing routes. These are: 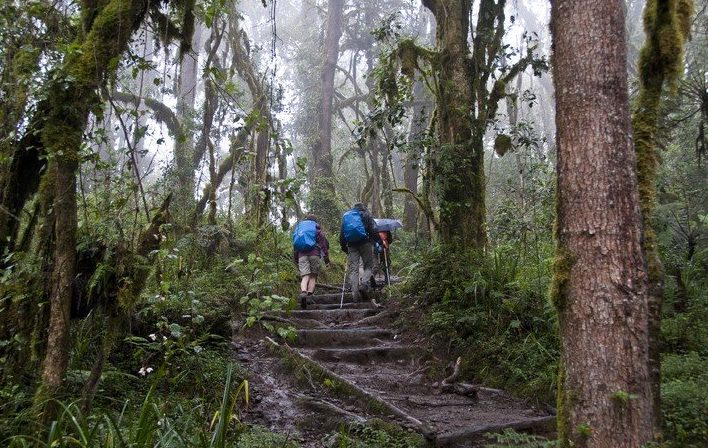 The Machame route as of 2006 is described here. The route is typically done on a six or seven-day hike.

The campsites and gates (with corresponding elevations) are as follows:

One benefit of the Machame route is its quick rise to relatively high elevations (~10,000 feet (3,000 m)), and a short ascent to the Lava Tower site (~15,000 feet (4,600 m)) before descending back to Barranco Camp (~12,700 feet (3,900 m)) on the same day. This follows the climber’s adage “climbs high, sleep low”, and helps altitude acclimation. The initial steep ascent also helps trekkers acclimatize better.

The Machame route starts from Machame Gate and travels upwards through the montane rainforest, characterized by dense vegetation, a muddy trail, and short sections of steep climbs. The first campsite, Machame Camp, is right after the dense tree cover in an area with lower but still thick bushlands.

The second day continues through increasingly sparse trees and bushes into moorlands. The day finishes with Shira Camp, which is on a small plateau in the high moorlands, and features views of Kibo in the northeast and Mount Meru towards the west. White necked ravens can be seen throughout the day. There is also a set of small caves a short walk from the campsite known as the Shira Caves.

Garden of the Senecios, with part of Kibo in the background.

The third day starts in the moorlands and moves into alpine desert, with fewer trees and more rocks. The highest point is the base of the Lava Tower, after which the trail descends into the Barranco Valley. More vegetation is present in this zone, especially the area just before the campsite. This area is called the “Garden of the Senecios”, which features many of the huge senesce plants. Shorter lobelia plants are also present.

The fourth day starts with the ascent of the Barranco Wall, which is considered a scramble in climbing terms. The trail continues with many up and down sections across small streams and rivulets and finally crosses the Karanga River to the Karanga campsite.

The fifth day follows the path up and across a rocky zone, finishing at the high camp Barafu. Very little vegetation can be found on the inhospitable terrain. A field of sedimentary rocks litters the ground. (Note – the six-day trek omits the Karanga campsite, and trekkers continue directly to Barafu on the same day.)

The summit is usually attempted on the very early morning of the sixth day (around midnight). Barafu is also used as a summit campsite for the Umbwe route. Trekkers typically take somewhere between five and seven hours to ascend, using headlamps and cold weather gear. Making the ascent on a full moon or shortly thereafter can make the headtorch unnecessary. The first milestone, generally reached shortly after dawn, is Stella Point (18,652 feet (5,685 m)), which is on the crater rim. Following Stella Point, the trail continues for another 60 minutes to Uhuru Peak, the summit.

The descent back to Barafu takes roughly four hours. Some trekker’s scree slide down the slope, which entails skidding/running down the loose gravel at medium speed. From Barafu, trekkers typically take a short break, and continue downwards through the alpine desert and ensuing moorlands to Mweka Camp.

The seventh and final day has trekkers continue through the montane forest to Mweka Gate. Troops of black-and-white colobus monkeys can often be seen in the dense growth.

End of our tour through Machame route.

The Marangu Route (also known at the “Coca-Cola” route) is the easiest ascent of Kilimanjaro, although any ascent can be challenging. Climbs can be done over 6 days. It crosses The Saddle, a 5 kilometres (3.1 mi) wide, high-altitude, semi-desert that separates craggy Mawenzi from the main summit Kibo. From the summit, glaciers, screes, cliffs, afro-alpine moorland, and forests lead down to the cultivated foothills.

The Merangu route is a favourite of local tour operators as it’s the shortest route and requires no camping gear to be carried. For this reason it is often the cheapest option. Because of its short profile, the Merangu route actually has the lowest summit success rate out of any route.

Trekkers sometimes spend an extra day to acclimate to the altitude at Horombo Hut. Also, trekkers often start the final ascent to Uhuru Peak early from Kibo Hut, because the scree is easier to climb when frozen, and dawn views from the crater rim are often spectacular.

End of our tour through Marangu Route

The Northern Circuit is the newest route on Kilimanjaro and takes 8–9 days. It begins from the north, then traverses nearly the entire mountain counter clockwise before approaching the summit from the east. This route offers diverse views, making a particularly scenic route. Being a lengthy, wilderness route and the only route to cross the northern face, there is very little traffic on this route. Its length means that it provides more acclimatization time than other routes.

Registration for the route is at Londorossi Gate, with the trek itself beginning at the road head at Lemosho Glades and following a little used track called Chamber’s Route. The route then follows around the northern face of the mountain, crossing the high desert plateau of Shira Caldera and passing Shira Cathedral to reach Moir Valley and then Buffalo Ridge. From here, the route climbs onto The Saddle, a lunar landscape which stretches between Kibo and Mawenzi Peaks. The overnight ascent to the summit is made from School Hut campsite to the crater rim at Gilman’s Point, from where a trail leads on to the summit of Kilimanjaro at Uruhu Peak. Descent from the summit is made via Stella Point, Barafu Camp, and Millennium Camp, leaving the park at Mweka Gate

End of our tour through Northern Circuit 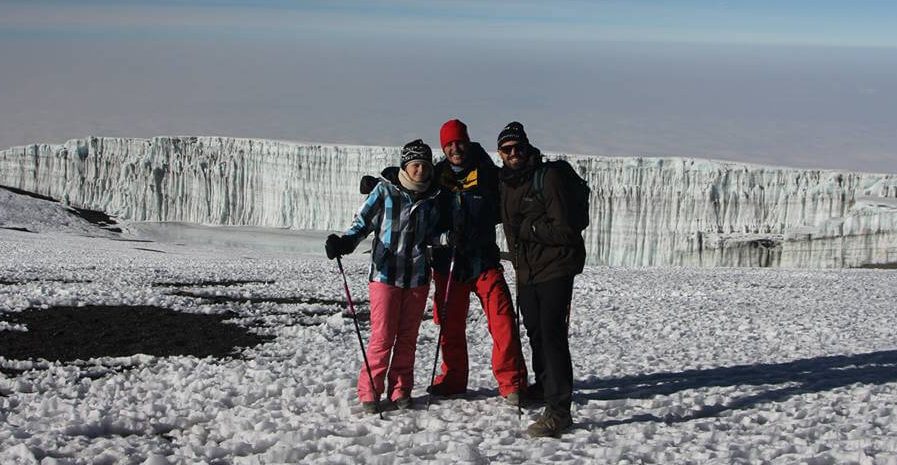 Also known as the Nalemuru route. Although the scenery is not as varied as the western routes, Rongai makes up for this by passing through true wilderness areas for days before joining the Marangu route at Kibo camp. Rongai is a moderately difficult route, and is highly recommended, especially for those with less backpacking experience. There are different options to complete the climb in 5, 6, or 7 days.

The route described below includes the ‘Mawenzi Tarn Hut variation which is recommended for acclimatization. However, some tours skip this and proceed directly from Simba camp to a ‘Third Camp’ at around 3700m to Kibo Hut, resulting in a (more difficult because of shorter length) 5-day total trip.

Climbers often omit the second cave during ascent, although the climb is more difficult.

End of tour through Rongai Route. 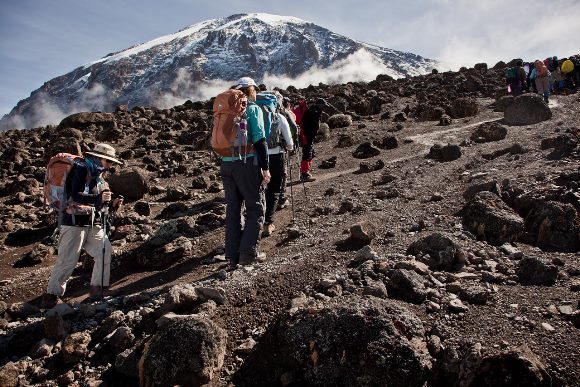 Here of all the routes, Umbwe is by far the most scenic albeit steeper route up the mountain. The Rongai is the easiest camping route and the Marangu is also easy, but accommodation is in huts. As a result, this route tends to be very busy and ascent and descent routes are the same. Although the Rongai route is a flatter walk, it offers less opportunity for acclimatization. The Machame and Lemosho routes both allow better opportunities to “walk high and sleep low”, which is critical to avoiding altitude sickness.Southern Ice fields viewed from Umbwe Route (Barranco Camp)

The Umbwe route is often considered the hardest but most spectacular and direct way to reach Uhuru Peak.

Ends of tour through Umbwe Route.

This is an unspoilt, remote, less-used, and beautiful way up to the Shira Plateau. Trekkers sometimes use it to ascend the Western Breach route or follow it with the Kibo South Circuit to ascend by the easier Barafu Route. The first day of the route hardly ever has any game animals, and armed rangers never accompany a group. [1]

The standard route takes 7 days on the mountain, and is sometimes extended to 8 days with a stay at Karanga Valley.

End of tour through Lemosho route.